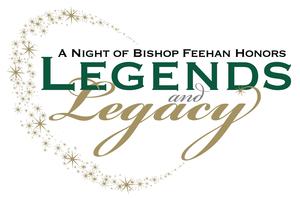 Bishop Feehan High School will host its annual Legends and Legacy: A Night of Feehan Honors which acknowledges alumni and friends for their contributions to the Feehan story.

Prolific winning on the football field and a smooth offensive game on the basketball court highlighted Matt Doherty’s outstanding athletic career as a Shamrock.

Matt played four years of varsity football for Feehan teams that went 42-3-2 and captured four Super Bowl championships. He starred on defense and offense - leading the conference in quarterback sacks as a senior, and scoring Feehan’s first touchdown at McCoy Stadium in a Thanksgiving Day victory over St. Ray’s.

In basketball, Matt was a two-time Sun-Chronicle All-Star after leading the Shamrocks in scoring as a junior and senior. His 23 points per game average as a senior included a memorable 29-point performance in a Senior Night win over North Attleboro.

After Feehan, Matt played football for a year at Fordham University and basketball at Worcester Polytechnic Institute, from which he graduated. He also developed into a talented amateur boxer, reaching the final of the 2011 New England Golden Gloves Championship as a light heavyweight.

ALL IN THE FAMILY
Matt joins his father, Brendan Doherty ‘77, enshrined in Feehan’s Athletic Hall of Fame.

A prodigious talent on the soccer field and basketball court, Jenna (Roncarati) Dailey ‘09 ranks among the best female athletes ever to play as a Shamrock.

Jenna was a soccer superstar, earning all-state honors as a senior and a spot on the Eastern Massachusetts Coaches’ First Team as a junior and a senior. She finished her Feehan career with 40 goals and 44 assists. Her success continued on the basketball court, where she helped Feehan win a South Sectional title as a sophomore and averaged 19 points and 15 rebounds as a senior co-captain in 2008-09.

Jenna then thrived as a student-athlete at Providence College, playing four years of Division I soccer and a year of basketball. She won PC’s Female Athlete of the Year Award for 2012-13. She has continued her soccer career as a player in the competitive Women’s Premier Soccer League, and she serves as the girls varsity soccer head coach at Marblehead High.

SCHOOL FIRST, SPORTS SECOND
Jenna passed on finishing her basketball season at PC so she could complete her student-teaching requirement for her degree. She teaches science at Marblehead in addition to coaching.

A standout for the Shamrocks basketball and volleyball teams, Amy Lepley received All-Scholastic Honors in both sports and served a co-captain in both as a senior.

Lepley then enjoyed a terrific career as t a student-athlete at the College of the Holy Cross. She twice earned Second-Team All-Patriot League honors and played in the league championship game as a junior and a senior.

Lepley remains active on the local basketball scene as the girls varsity basketball head coach at Norwood High, where she also teaches math.

Alden Harrison’s illustrious tenure at Bishop Feehan started as a fill-in director. But since that impromptu work in three decades ago, he has become synonymous with the school’s theater and dance programs and facilitated opportunities for thousands of students.

Starting with a production of “Oklahoma!” in 1988, Alden has directed and choreographed more than 60 shows. Impressed by his talent and work ethic, then principal Sr. Faith Hardin, RSM, added him to the faculty to teach theater and dance workshops that have helped to fill out Feehan’s robust curriculum.

“I never applied for a job here,” says Harrison. “I feel it’s a miracle that I’m here because of my two angels - (former faculty member) Donna MacPherson and Sr. Faith Harding.”

Away from Feehan, Alden is a fixture in the local dance community, with the Alden Harrison Dance Center dating to 1971. He also has worked with professionals at the Newport Playhouse and with productions in Providence.

THROUGH THE YEARS
More than 100 Feehan alumni representing more than 20 graduating classes attended a reception after Alden’s directoral finale on campus in April.

Justin Jutras ‘99 once told a Providence Journal reporter that he’s visited more states than most people see in a lifetime. His outstanding work with national Broadway companies has taken him coast-to-coast and helped  him carve out a career as a professional stage actor.

Justin’ time at Feehan included roles as Rolf in “The Sound of Music”, Sky Masterson in “Guys and Dolls” and the lead role of Julian Marsh in “42nd Street”. He describes his time in theater classes as “Mr Harrison trying to get my ego under control.”

Since graduating from Feehan and Rhode Island College, Jutras has taken touring roles in “Grease”, “The Wedding Singer” and “Bullets over Broadway”. He lives full-time in New York City and maintains a tight affiliation with the New York Theater Workshop, a hub of the stage scene in the East Village of Manhattan.

DID YOU KNOW?
Justin’s first on-stage kiss came in a 1997 production of “The Sound of Music” here at Feehan.

As his resume says, Mike became a “Person with Parkinson’s” Disease in 2009. Since then, he has strived to inspire and energize everyone he encounters with his resilience, humor, and positive outlook.

Mike has immersed himself in several organizations that support Parkinson’s awareness and research. He has lobbied governments, attended international gatherings, written newspaper columns, spoken with medical students and written a children’s book - “The Adventures of Starkinsons”, about a star who manages a Parkinson’s diagnosis.

Some of his greatest influence has come in Greater Attleboro, where his Team DominACHIN over PD has raised hundreds of thousands of dollars through an annual washers tournament, a shirt design and sale, and for many years a Mount Washington climb. Mike also is well-known locally as a certified Rock Steady Boxing Coach - training as a boxer helps ease the Parkinson’s symptoms. He teaches several class in the sport at a North Attleboro studio.

A three-sport student-athlete at Feehan, Mike played varsity football at the University of Rhode Island and was inducted into the BFHS Athletic Hall of Fame in 2015.

AN ARTIST, TOO
Mike’s wife, Gail Achin, illustrated “The Adventures of Starkinsons”, with Mike Chipping in with watercolors on the stars and planets in the illustrations.

With remarkable courage and perseverance, Mike has turned to exercise and physical fitness to combat his Parkinson’s Disease diagnosis and become a role model in the Attleboro area.

Today, more than 100 Parkinson’s patients are Rock Steady Boxers at Fight 2 Fitness Gym in Pawtucket, R.I. Mike has driven that growth as a financier and an ambassador, always looking to lift up others as his fitness continues to improve. His latest physical achievement? Completing the 2019 Boston Marathon in April, alongside his wife Donna.

BACK TO SCHOOL
Mike completed a certificate program in “Fundraising and Marketing: Building Nonprofit Capacity”  in 2017 from Northwestern University’s Kellogg School of Management.

Few parents have supported and lifted up the Feehan Family with the enthusiasm, wisdom and loyalty that Oggie and Jacqui Dodge P’10, ’11, ’13, ’19 have shown over the last 13 years. Their commitment to sharing the gifts, talents and time have strengthened nearly every aspect of our community.

Jacqui Dodge’s work for over 10 years chairing the online portion of the Feehan fundraising auction helped make that event a pillar of the school’s annual fundraising. She coached volunteers, solicited and cataloged thousands of items, and worked seamlessly with Sue Rojee P’03, ’05 and fellow chair Fran Leonard P’10, ’18, ’18.

The owner of an advertising firm, Oggie Dodge has offered his expertise and hundreds of hours to create much of Feehan’s visual brand, including the recent Shamrock Fund and Setting Our Hearts Gala presentations. He also has served as a trusted member President Tim Sullivan’s Advisory Board for the past three years.

The parents of Samuel, Madeline, Henry and Phoebe, the Dodge’s have been fantastic Feehan cheerleaders at athletic events, arts and music performances and in the greater community.

Congratulations to our 2019 honorees. We look forward to seeing so many from our Feehan community at Legends & Legacy on May 10 at The 'Rock, Bishop Feehhan High School. To purchase tickets, please visit bishopfeehan.com/legendsandlegacy