At Bishop Feehan High School we dare to believe that great things are always within reach. Today, we invite you to be bold with us, to believe in yourself and to reach higher than you ever thought possible.

For 60 years, Feehan has focused solely on educating young women and men to lead lives of purpose, daring to believe that seemingly conflicting concepts — mercy and excellence, high standards and loving support, championships and sportsmanship, faith and reason, strong individuals within a stronger community, pride and humility — can all co-exist perfectly within our high school walls. 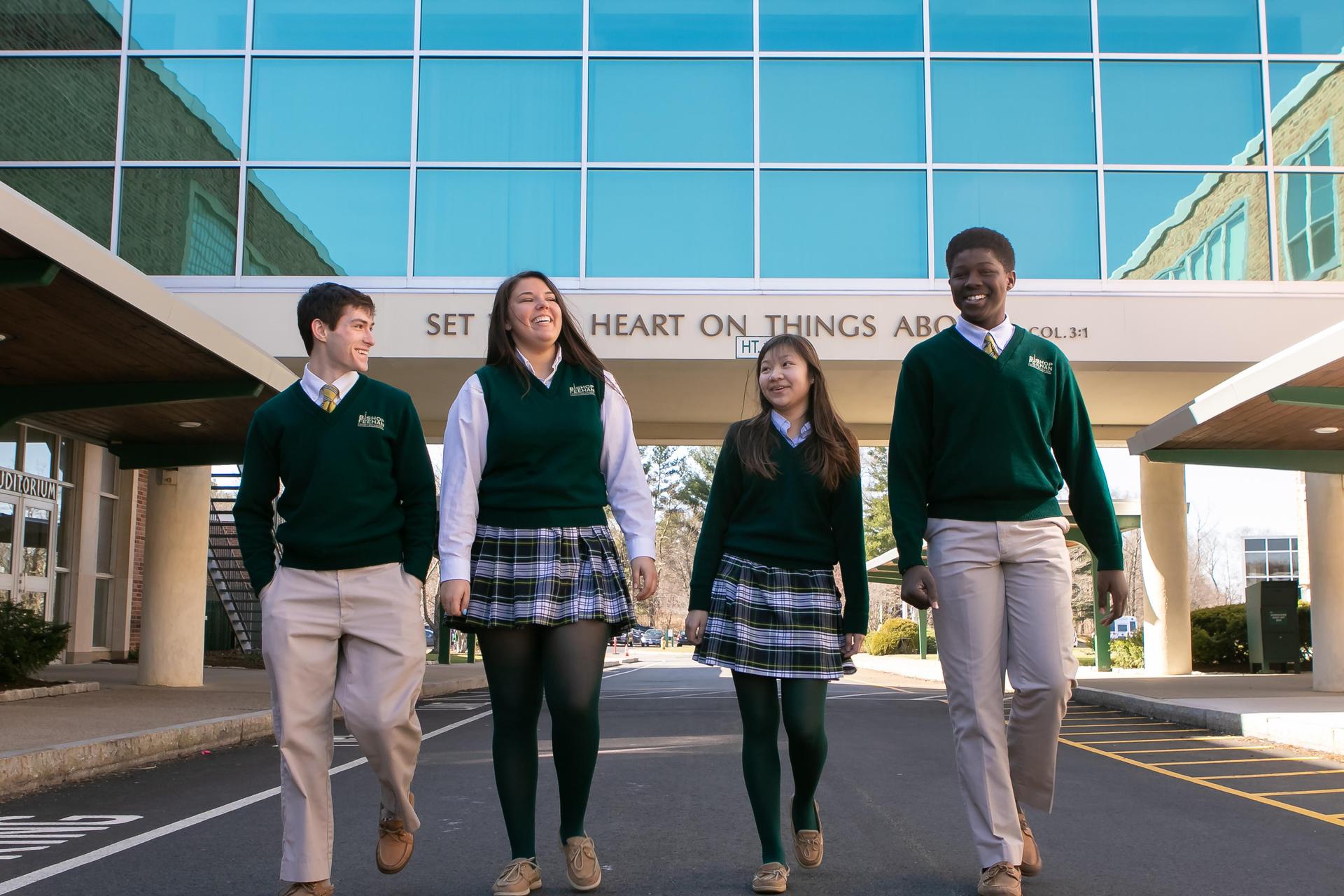 Most importantly, we dare to believe that every single student in our school is called to be their very best selves, and we do all we can every day to make that potential a reality.

How does this happen? It starts with teachers who believe deeply in the importance of their work and the talents of their students. It depends on a community that extends from our supportive current families through more than 12,000 alumni in all 50 states and around the world. And it centers — as it has since our school’s opening ­— on great kids bringing their talents, passion, energy and joy to Feehan every day.

Is that you? We believe it is. Are you ready to believe, too, and take a chance on more? If so, we can’t wait to help you get to know us and get started on an amazing high school journey.

Feehan firmly believes that middle schoolers thrive best in their middle schools or their K-8 grammar schools. For decades we’ve welcomed ninth graders who are ready to lead and learn, students who have gone through a natural academic and developmental progression that serves them best.  Research outlines various advantages to having children remain in one school as they go through middle school:

Remaining in a middle school environment allows students to experience age-appropriate activities and events without the influence of older students. Because students aren’t living in the shadow of high school-aged students, they are more likely to embrace pieces of childhood that they might otherwise hide in front of older students. Kay Hymowitz, an author and journalist who writes about topics relevant to children, feels that PS-8 schools “…are in a better position to remind us all, not just kids, but parents and the entire community too, that these are still children and should be treated as such." We’ve seen great advantages to letting development happen at its proper pace.  There is no rush. In fact, rushing that development can have significant adverse effects.

After analyzing various studies, Beverly Amico, a writer for Essentials in Education, found that the middle school environment allows young adolescents to “be leaders and challenge themselves with a sense of security [because] they know their place well and can remain confident in some areas while exploring new areas where they must gain confidence.” Students are put in roles that develop leadership skills, especially the eighth grade students, rather than get lost in larger 7-12 alternatives. We love welcoming 9th graders who just completed one or two years of leadership and being role models in their own buildings. They come to Feehan and succeed very, very well.

Throughout middle school, a student’s interests, learning styles, and academic strengths and weaknesses are clearly defined. This knowledge equips the student and parents to find the best high school match, a decision that is difficult to make when a child may have just started middle school. We know that some high schools imply that “if you don’t come over early, there may not be an opening for you in 9th grade”. This is simply not true, Waiting until 8th grade allows your teenager to develop well before deciding on the 4-year high school home.

Bishop Feehan believes strongly in our coed model. Over the years, neuroscientists and psychologists have done research to support this model.

As students move through their academic journey and into careers, they will be naturally surrounded by both genders. Teachers at Feehan are intentional about emphasizing the importance of respecting and working with all people — including those of the opposite sex. Researchers with the American Council for Coeducational Schooling say that students should be taught to focus on school work in a coed setting, just as they will be expected to work in a coed environment. They go on to say that coed schools allow students to interact with the opposite gender and to develop skills similar to those they will need in the workplace.

Students Learn From More Perspectives When Both Genders Are Involved

Students at Feehan learn through various experiences from their teachers, as well as the students around them. The coed setting broadens a student’s understanding of how things are viewed, interpreted and understood from various perspectives. In order to be successful, children must learn to live and work with others who are different. Girls and boys will be more successful when they can use a combination of skills traditionally associated with each gender. This can be accomplished when boys and girls are given the chance to learn skills and different perspectives from each other in a coed environment.

In an interview with the American Psychological Association, Diane Halpern, author of Sex Differences in Girls and Boys said, “School is preparation for adult life. How can boys and girls learn how to interact as equals in the workplace if they have no experience interacting as equals in school?” In an article titled “Why Coeducation Matters,” Neuroscientist and Blue Brain, Pink Brain Author Lise Eliot states, “If we really want women and men to be equal partners in both the home and workplace, they need to be raised and educated in a truly gender-inclusive way, where both sexes learn through repeated experiences how to respect, collaborate with, and lead each other.”

Research shows that children are aware of gender stereotypes as young as two years old. Many factors influence a child’s understanding of gender stereotypes, including society, family, and school. In 2013, a team of researchers found that students, when segregated, tend to conform to gender stereotypes. This team published a report about the role schools play in teaching children about gender differences. In this report, they conclude that educators who “...promote cross-gender interaction expose pupils to counter-stereotypic models, and discuss and teach challenges to gender stereotyping, optimize their pupils’ developmental outcomes.” Lise Eliot comes to the same conclusion in her book Pink Brain, Blue Brain. She states that “...coed classes are ultimately a better environment for deflating stereotypes of the opposite sex, just as any stereotype withers when you get to know people as individuals.”