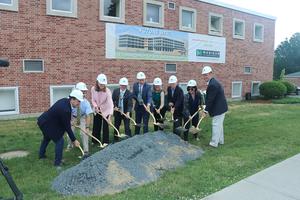 Capital Campaign co-chairs Kevin Cryan ‘92 and Dennis Kelly led the group in marking the momentous occasion. With the school year officially ending on Thursday, June 16, the construction trucks will roll in next week for a fast-paced start to the exciting project.

When complete, the Arts & Innovation Center will feature brand new and renovated spaces for the school’s theater, vocal music and band programs. It also will include entirely new spaces for the school’s growing Business & Innovation department, including computer science labs, physics labs, an eSports suite and an expansive IdeaLab (fabrication and testing) featuring a robotics arena and 3-D printing room.

“The firsts keep coming at Feehan,” pointed out Sullivan. “Our 61-year-old building and campus just keep getting better thanks to the care of so many who have come before us and the support of so many who believe in our future. This investment in the arts and in innovation matches exactly the priorities of our 2019 strategic plan. It’s exciting to see it all coming together. ”

The new building is the latest (and largest) development connected to the school’s $13 million Daring to Believe Capital Campaign, which has already helped power campus ministry changes and significant increases in the financial aid available to Feehan families.  These improvements come on the heels of the addition of the school’s Servant Fitness Center, ‘Rock gymnasium and new locker rooms, which have all been completed in the past 10 years.

Next up (later in 2023) will be a complete renovation (two new full-size turf fields) of Feehan’s McGrath Stadium and Beach Field athletics complex. More than 300 donors have already given to the Daring to Believe campaign.

“It’s a privilege for us to represent Feehan and help lead this campaign,” point out Cryan and Kelly. “We believe deeply in the mission of the school, and it’s been gratifying to see so many Feehan folks come together to make this amazing project possible. We know this will make Feehan an even stronger school for future generations.”