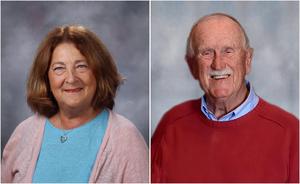 Beloved teachers and mentors will be recognized on April 1.

ATTLEBORO, Mass. – Bishop Feehan High School is proud to announce that Joan Drobnis and Neil Loew will be honored with the school’s Patricia M. Harrington, RSM Hero of Catholic Education Award during the “Setting Our Hearts” Gala on Saturday, April 1, 2023 at the Rhode Island Convention Center in downtown Providence, R.I.

Drobnis and Loew combined to serve the Bishop Feehan High School community for more than 80 years - Drobnis as a world languages teacher and club and honor society moderator; and Loew as a teacher, coach and Director of Guidance. They are the eighth and ninth recipients of this award, which is among the most prestigious in the Feehan community.

“Talented, dedicated, mission-driven educators have always been the essential ingredient here at Feehan. Joan Drobnis and Neil Loew capture that spirit perfectly,” says Feehan President Tim Sullivan ’87. “In and out of the classroom, they inspired hundreds of colleagues and thousands of young people to live our school’s mission and ‘set their hearts on things above.’ And the relationships they built with students have sustained through the decades. They represent everything we look for in a Feehan teacher.”

Joan Drobnis taught all levels of Spanish across 41 years at Feehan. Her love of Spanish, world history and culture inspired her to not only teach the language but also encouraged her students to explore the broader world and challenge ethnic stereotypes. She accomplished this through the creation and the direction of Feehan’s Amigos program. Originally an extension of the Spanish National Honor Society, Amigos connected Feehan students as tutors and mentors for bilingual students at Attleboro middle schools. The program continues to this day and engages dozens of Feehan students each year.

During school breaks, Drobnis led dozens of overseas trips for Feehan students. These opportunities allowed students to see historical sites, learn customs and meet people in countries around the globe. Many alumni have said those experiences opened them to careers in international business, health and education.

Drobnis received the Attleboro Area Chamber of Commerce’s Teacher of the Year Award in 2002. She also earned International Certifications in Spanish from the Ministry of Education of the Spanish Government - the only teacher in Massachusetts with that honor at the time of her designation. Drobnis also has presented at state, regional and national language education conferences and served as an Advanced Placement Reader for the College Board.

Feehan named its Spanish National Honor Society after Drobnis in 2020.

Neil Loew has ties to Feehan that stretch back before the school opened. A 14-year-old Loew assisted Most Rev. James L. Connolly, Bishop of Fall River, at the school cornerstone laying ceremony on November 11, 1960. Eight years later, he’d return to Holcott Drive to begin a 43-year career as teacher, coach and counselor. His warm humor and love for his students and school set a tone at Feehan that resounds even today. Hired as part of the social studies faculty, Loew soon joined the Shamrocks’ football, basketball and golf coaching staffs. Later, he added part-time guidance counseling duties to his role. He turned his sports focus strictly to golf by 1980 and a decade later moved into a full-time guidance role, including a long stint as the department’s director.

Carrying on a long legacy of strong Feehan guidance efforts that dates to Regina Coughlin, RSM, Loew guided thousands of students and their families through Feehan’s academics and eventually college application and selection. He also kept the department modern and built relationships with colleges and universities throughout the region. Those efforts and others earned him the Catholic Counselor of the Year award in 2003.

On the golf course, Loew’s teams recorded three state championships and 462 match victories across his storied career. He was named an Honorary Feehan Alumnus in 1997 and was inducted into the school’s Athletic Hall of Fame in 2005.

The Patricia M. Harrington, RSM Hero of Catholic Education Award was established by Bishop Feehan High School in 2017 to honor champions of Catholic education who make significant contributions in service of Catholic schools and the Church.  Sister Pat — who passed away in 2015 — was a legendary figure in the Feehan community: her example of faith, love and mercy set a standard at Feehan for nearly 40 years and will be remembered always. Sister Pat herself (posthumously) was the first recipient of the award. “The Sister Pat award is Feehan’s highest honor,” says Sullivan. “Our honorees each year embody the ideals that have allowed Catholic schools to thrive for decades and decades and remind us of the impact that one person, like Sister Pat, can make. Joan and Neil certainly fit that tradition. Continuing to find and develop leaders with their devotion and joy will serve our Catholic schools well in the years to come.”

The Gala itself has become the central annual community event of the Feehan year, welcoming more than 700 people to celebrate the Feehan community and support the school.

“The Setting Our Hearts Gala is a one-night event that celebrates all things Feehan – our students, our community, our mission, and our vision for the future,” says Feehan Director of Alumni and Volunteer Engagement Shawna Igoe.

Besides the Hero of Catholic Education award, other highlights of the evening will include an elegant dinner, a limited live auction, a $10,000 cash raffle, a live band, dancing and a host of surprises.

For more details, to purchase Gala sponsorships, or for information on paying tribute to our honorees, visit BishopFeehan.com/gala or contact Shawna Igoe at 508.226.7411 x 162 or [email protected]. Gala tickets will be on sale in early February.