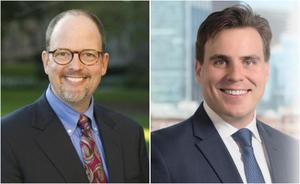 Two former Shamrocks, Joe MacDougald ‘83 and David Libardoni ‘05, returned to campus to speak to students about their career journeys. While Feehan has offered the 'Rock Talks Speaker Series for a number of years, this was the first 'Rock Talks: Career Connections, specifically designed to help students learn from Feehan alumni about the pathways and work realities of certain professions.

Joe MacDougald '83 is the executive director of the University of Connecticut School of Law's Center for Energy and Environmental Law. Prior to joining the full-time faculty at UConn, he led an international biomaterials company in several senior executive positions and spent nearly 20 years in municipal elected and appointed offices in CT, including chairman of the Board of Finance and Planning and Zoning Commission chairman.

David Libardoni '05 is a partner at Nutter McClennan & Fish LLP in Boston. His practice focuses on sophisticated and complex commercial real estate projects in Greater Boston and around the country. Prior to law school at Boston College, David graduated from Tufts University and then spent two years as a U.S. Fulbright grantee in South Korea as an English teaching assistant.

Mr. MacDougald and Mr. Libardoni reflected on their time at Feehan, shared their career stories, and answered student questions. As Ryan Cronin ‘23 observed, “It was great to see how each of them pivoted their career so successfully and they both really like what they currently do.” In addition to students interested in careers in law, both of Feehan’s AP Environmental Science classes attended, as both attorneys do significant work with environmental impact.