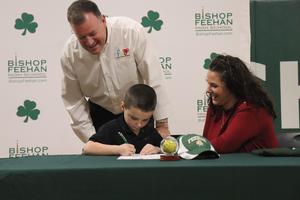 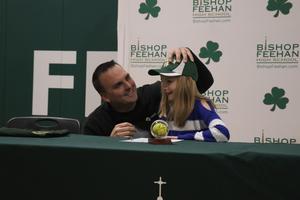 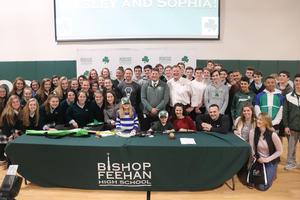 Like any 4-year-old, Wesley Beal is a bit fidgety at formal events.

Tuesday, as his mother Stacey spoke at an event at Bishop Feehan High School, Wesley kept running back and forth between her and the audience.

You would have never known that just a few years ago the Attleboro boy was undergoing 10 hours of surgery to remove a brain tumor at the tender age of 16 months.

“Wesley is now a crazy, 4-year-old boy, loving life,” his mother told the audience of student-athletes and teachers in one of the school’s gyms. “A lover of sports, he plays hockey and T-ball, loves to play trucks, ride a scooter and wrestles on the living room floor.

“He loves to watch the Patriots and cheer his sister at her events.”

Well, Wesley now has another team to cheer for.

The Feehan boys lacrosse team “adopted” him Tuesday, while the girls’ team did the same with his sister, Sophia.

The adoptions are part of a national program called Friends of Jaclyn that matches children with brain tumors and their siblings with sports teams.

Founder Dennis Murphy told the audience the story of his daughter Jaclyn, who was given a 30 percent chance of survival when she was diagnosed as a child.

She overcame the odds and is now 24 and coaching lacrosse herself.

Jaclyn, according to a story reported by HBO’s “Real Sports,” was inspired by a photograph in her hospital room of a women’s lacrosse team.

Her youth lacrosse coach made some phone calls and the coach of Northwestern University’s team got her players to adopt Jaclyn, texting her when she was down, inviting her to games and giving her team gear.

Years later Jaclyn realized the girl in the photograph in her hospital room was a younger version of the very coach who arranged her ongoing relationship with the Northwestern team.

Murphy said the relationship between the teams and the young patients is one that both sides benefit from.

He said having older athletes to look up to and get close to gives the children hope and helps them through rough days.

Some of the student-athletes have been inspired to go into medicine because of their relationship with the children, he said.

After 12 years, the foundation has paired 817 children with teams.

The teams have been raising money for the foundation and now have adopted the Beal children.

“We jumped at the chance. It’s great for the kids and it’s a learning experience for the students,” he said.

As for Wesley, he still has to have MRIs taken every few months and he has a seven-inch scar on the back of his head, according to his mother.

He will have to be monitored for years to come, she said.

“Outgoing and smiley would be great qualities to identify him by,” she said.